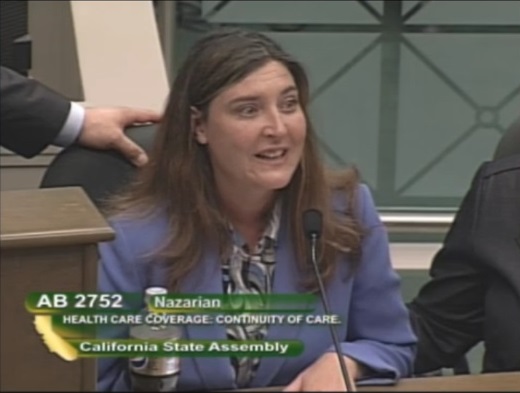 END EPILEPSY® volunteer and Epilepsy California grassroots advocate, Kristy, traveled to our State Capitol on April 19, 2016, to share her story and testify before the California Assembly Health Committee in support of AB 2752 Health Care Coverage: Continuity of Care (Nazarian). AB 2752 would require that an enrollee be notified, during the renewal period, by the health plan or insurer if there have been changes to their medication or provider coverage. Examples of such changes would include if a specific medication is no longer being covered or a current provider is no longer within network.

Seven years ago, Kristy had her anti-epileptic medication switched without her knowledge or consent. As a result, she had multiple breakthrough grand mal seizures and lost some of her freedom and independence.

“Before the switch I drove 50 miles to work on LA freeways. Now I can’t drive. I can’t go to the movies, sporting events, or concerts. Even taking my kids outside can be hard, and has to be calculated. My kids ask me to play video games and I have to say no.”- Kristy

Since that day, Kristy continues to suffer the impact of that incident and is constantly fighting to ensure she receives the correct medication when she picks up her prescription – even when her only option has been to run up credit card debt to pay the out of pocket expense of as much as $2,000 for a 30-day supply.  Even just a week before traveling to Sacramento, Kristy was surprised when she walked up to the pharmacy counter to be issued a refill that was not her prescribed medication – despite her Epileptologist’s clear instructions of ‘Do Not Substitute’.

Kristy relayed her experience to the Committee and her advocacy efforts were a great success! The bill passed the Assembly Health Committee and continues through the legislative process in hopes of eventually becoming law and improving the lives of the nearly 350,000 people with epilepsy in California.

To stay informed about this and others impacting the lives of those with epilepsy AND to take part in letter writing campaigns or more, sign-up for EPILEPSY CALIFORNIA.