The Backwards Guy Attempting to Break the Guinness World Record for the Fastest Marathon Ever Run Backwards Finishes Race in 5 Hours, 43 Minutes, 59 Seconds 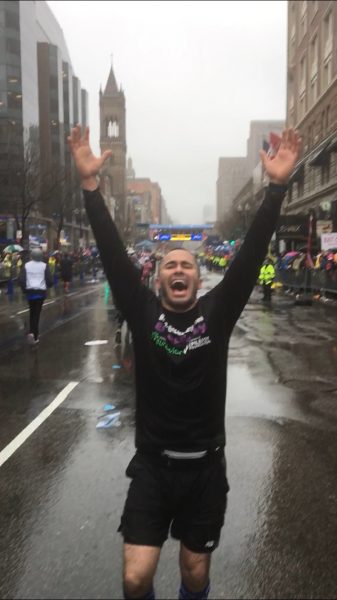 Los Angeles native and Disney movie production lawyer, Loren Zitomersky (aka “The Backwards Guy”), attempted to break the Guinness World Record for the fastest marathon ever run — backwards. Despite high winds and heavy rain, Zitomersky ran all of the 26.2 miles of the Boston Marathon backwards and although, he was very close to beating the record, he crossed the finished line at 5 hours, 43 minutes, 59 seconds. The current Guinness World Record is 3 hours, 43 minutes, 39 seconds and was achieved by Xu Zhenjun at the Beijing Marathon on October 17, 2004. While Zitomersky’s objective was to beat the current record, his main goal was to create awareness about epilepsy and raise funds to End Epilepsy. The money raised supports the Epilepsy Foundation’s efforts to help better the lives of the more than 65 million people living with epilepsy worldwide.

“When I qualified for Boston with a 3 hour, 14 second marathon, I immediately told myself I’m going to go big with my epilepsy fundraising and awareness campaign,” said Zitomersky. “I stumbled upon the record for the fastest backward marathon and decided to embark on this backwards journey. Even though, I did not break the record as I had set out to do, I’m excited about the fact that I’ve raised more than $65,000 so far for the Epilepsy Foundation to help End Epilepsy.”

Zitomersky started raising money alongside his dad since he was 12 years old to create awareness of epilepsy through long-distance bicycle rides, triathlons and marathons. Together, they have raised more than $300,000 for the Epilepsy Foundation by doing long-distance bike rides, marathons and an Ironman. Zitomersky’s brother, Brian, had epilepsy and tragically passed away after suffering non-stop seizures while asleep. Zitomersky and his dad started fundraising because they didn’t want other parents, families and kids affected by epilepsy to feel alone.

Since Zitomersky began this journey, the money he and his dad have raised so far has helped fund 10 teen retreats and Family Camp scholarships. His efforts have spread far and wide, not just throughout the U.S. but also in Canada, the UK, Bolivia and Czech Republic. He has participated in numerous interviews with national, regional and local media, including the Associated Press, USA Today, Boston Globe and NPR. To date, his story has been covered by 247 news outlets/blogs and continues to gain interest.

But his fundraising doesn’t end at the finish line of the Boston Marathon. Zitomersky recently kicked off the “26 Steps Backwards to End Epilepsy Challenge” encouraging people, including celebrities Rick Harrison (“Pawn Stars) and Greg Grunberg (“Star Wars: The Force Awakens”), to take 26 steps backwards and donate $26 forwards to End Epilepsy. All the money raised by Zitomersky will go directly to the Epilepsy Foundation to support local programs for families affected by epilepsy —such as camp, family day and workshops — and research and awareness to support the nationwide fight to End Epilepsy.

To accept the 26 Steps Challenge and donate, please visit 26Steps.org.