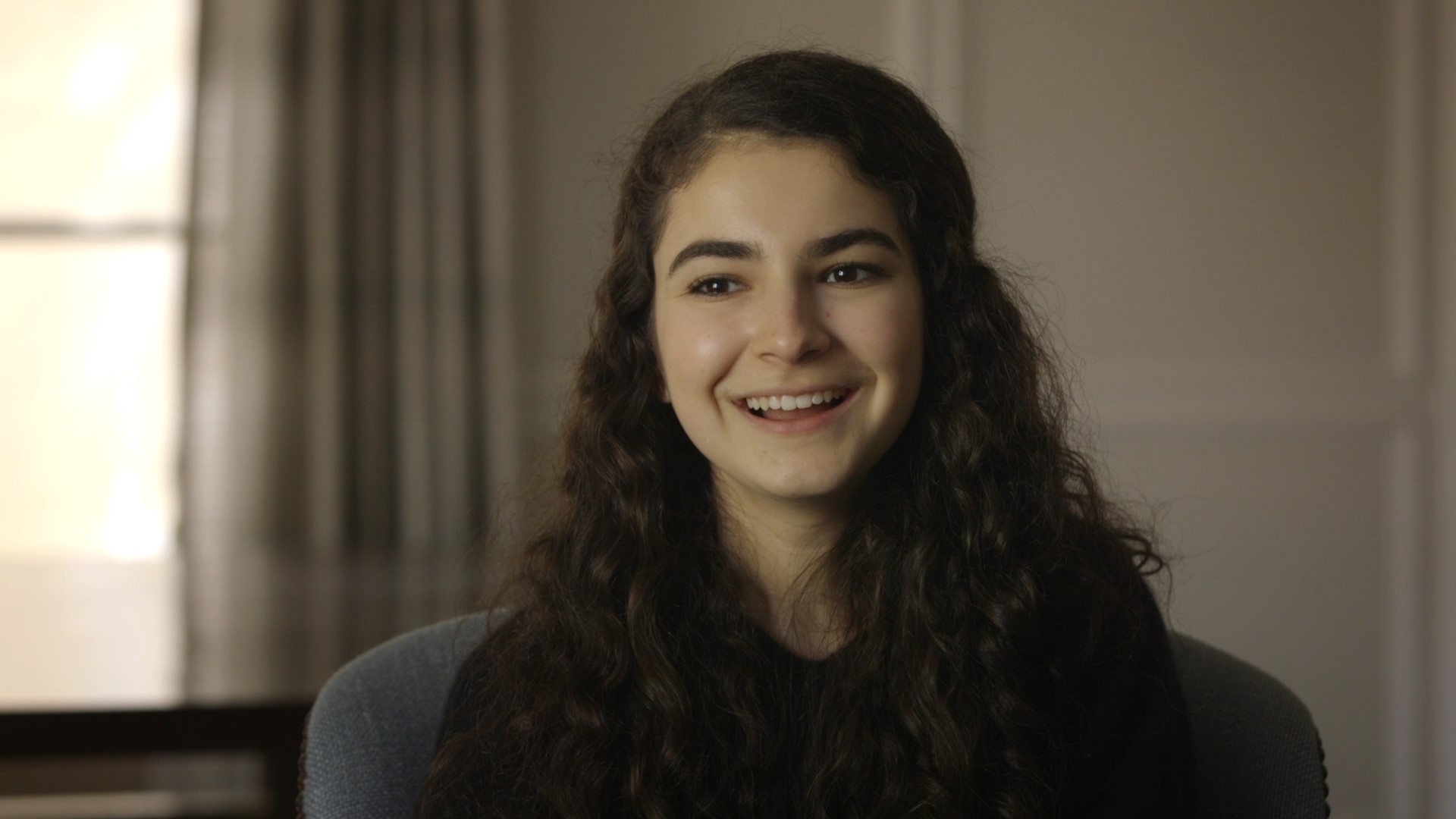 “Most people wouldn’t know just how determined she can be…”
Zeke, age 13

There is an idea that it’s not what you say about yourself that matters – but what others say about you – that holds the most weight. Then again, take that idea into any high school and you might want to reconsider giving such power to the masses. Maybe that’s what makes Maddie so interesting – it’s what she does for others and what others say about what she’s doing – that makes this 15-year-old, high school sophomore, a Local Hero.

She already has so many prerequisites: she’s been to Washington, DC to educate members of Congress about epilepsy as part of the Epilepsy Foundation’s Teen Speak program; she and her family have been staples at the annual Care+Cure benefit dinners; she’s been a regular participant in the Walk to End Epilepsy and has recruited her friends and neighbors to join the team. And her new project has roughly 20 people of all ages at her house on a Sunday morning (more on that in a bit). She’s done just about as much as someone her age could do – especially considering she’s never had a seizure. 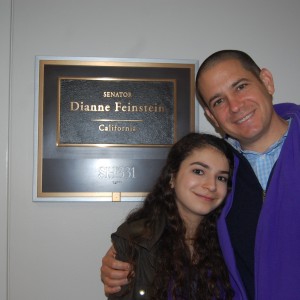 Maddie and her father shortly after advocating with Senator Feinstein’s office!

Maddie doesn’t have epilepsy; her youngest brother, Ari, does. He has the type of disabling epilepsy that is far too common and often far too overlooked.(What kind? Susan?) Ari can’t walk. He can’t talk. He can’t feed himself. He’s 11-years-old, confined to a wheelchair, and has had severe epilepsy since as long as Maddie can remember.

Yet, when Maddie talks about him and then introduces you to him, with her warm smile and energetic vibe, you’d almost look right past all of that.

“He’s honestly the happiest person I know,” Maddie says when describing Ari. “He is always so happy and loving and he’s down for whatever!”

It’s Maddie’s roleas Ari’s big sister that has brought groups of siblings and their families to her family’s home on this Sunday morning. They’re all there to support her Sibs4Sibs video project.

To kickstart the project, she invited over some of the friends she’s made throughout the years at various End Epilepsy events and interviewed them about their stories, on camera.

Most remarkable about the day wasn’t the content of the interviews (we’ll all have to wait for the final product for that) but what happened before and after the siblings went in to share their stories. 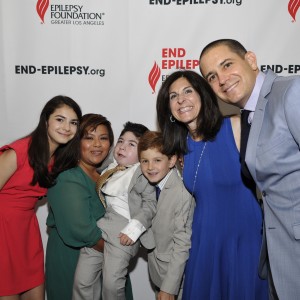 To let Maddie explain it, “The idea is to help people know that you’re not alone. No matter what you’re feeling or what you’re experiencing, someone else is feeling and experiencing the same thing.” She explains.

Achieving that goal on this Sunday is visible. Tangible even.

It’s apparent as the siblings, of all ages, are milling about the house and having brunch. There are other kids like Ari there as well as teens who have been seizure free for quite some time. Each of them has a sibling (or two) with them, and it’s in the quiet relief of being surrounded by people who know what you know and know how you feel, that you see the brothers and sisters of someone with epilepsy start to interact and relate to each other.

When asked if she notices the connection happen or if she expects it, Maddie smiles and says, “Oh yes. Definitely. It’s almost instant, like, nobody says anything but there is an understanding that we’re all in this together.”

It’s that idea that she hopes the finished video will convey to others. It’s why she created Sibs4Sibs.

“I wanted to do more than I had done before, and I thought of how there are all these videos on social media about different things and different stories and those always kind of stick with me, so I wanted to do something bigger — something for the people who might get overlooked in the Fight (to End Epilepsy).”

She is looking for more submissions, beyond the Sibs she already knows, and she wrote a letter detailing her experience as a sister to her brother with epilepsy.

The letter is open and honest about not only the struggles of caring for and connecting to Ari, but also about the struggles of finding and accepting her place in the world and in her family, when so much attention is given to her brother – rightfully so, she is quick to add.

Asked what she hopes for others’ submissions she explains, “I’m looking for people’s honesty, and a diversity of stories, because we’re all connected and we’re all fighting for a change and trying to make a difference.” However, she adds, not everyone’s story will bethe same, and she understands how deeply personal it will be for everyone who has the courage to share.

And if the Sunday morning kickoff is any indication, there is good reason to believe she’ll get what she’s looking for. When talking to the groups of siblings who have gone into the interview room, they all mention how warm and almost professional Maddie seemed and how it made them feel comfortable speaking honestly with someone who inherently understands what they’re going through.

Maddie of course, likes talking about Ari, and she describes their relationship as “the best!”.

“He loves doing things and he’s always happy to do them with you. We always watch movies together. I really like art and I’ll take out my projects and he’ll paint with his hands. He’s just the best person to do things with and have around. Whenever I’m in a bad mood or not feeling great, I go up to him and connect or read him a story — having him be there is really comforting.”

What must also be comforting is the support she has from her parents. Her dad, Mark, mentions how impressed he is with her time management.

“There are nights when she’ll have 5 hours of homework and it seems every weekend she has a commitment to some other project a friend might be doing to help raise money for this or raising awareness for that, and she’s in the middle of training to help for a Teen Suicide Hotline, where kids can call if they are going through a tough time. She’s really unbelievable.” Mark says.

But the true testament comes from Maddie’s other younger brother, Zeke. At age 13, he’s the middle brother of the family and not shy to note how his big sister “can sometimes be annoying.” He says this with a smirk on his face and then, in a way only a little brother can, turns very sincere and reflects.

“She really deserves this. She does so much for other people and for Ari. Most people probably wouldn’t know just how determined she can be… When she sets her mind to something she’s going to get it done, and it’s going to be great.” Zeke says.

The day is winding down and the interviews are almost all finished. Maddie still has a smile on her face and offers a little insight into how they’ve gone so far and what she’s hoping will come from the final product.

“I hope this project and video connect more siblings. And, people who were in the dark can know they aren’t alone and have a space where we can be our true selves and not have to wear a mask.”

It’s a really mature goal, and coming from a kid who isn’t even old enough to drive, it almost makes you wonder if she really is a teenager. But just ask her about her favorite thing to do with both of her brothers and that concern quickly disappears.

“Oh, I don’t know,” Maddie laughs. “Probably his (Ari’s) favorite thing — which is when me and Zeke push him around really fast in his stroller — we have a ramp in the house for it and he loves going fast over it.”

Ah, to be a teenager.

Ed. Note: To sign up for the Sibs4Sibs Project fill out the form below and a staff member will be in contact.