A partnership between the local Epilepsy Foundations in California

Over 427,000 Californians
live with epilepsy.

Epilepsy California was created through the collaborative efforts of the Epilepsy Foundations in California.

Epilepsy California is the recognized, unified voice of people with epilepsy throughout California. We are pro-active in developing a statewide epilepsy agenda, and advocate within state government and state agencies for public policy which ensures the rights of people affected by epilepsy to fully participate as contributing members of their communities.

Epilepsy California represents 1 million people in California with epilepsy and their family members. One in every 10 Americans will experience a seizure during his or her lifetime. Every three minutes a new person is diagnosed with epilepsy.

Epilepsy is defined as neurological condition characterized by recurrent seizures and can develop at any stage of life; children and the elderly are particularly affected. Epilepsy can stem from a variety of causes including head trauma, brain tumor, stroke, infection, neurodegenerative disorders including Alzheimer’s disease, genetic predisposition, and poisoning. Epilepsy remains a formidable barrier to leading a normal life by affecting employment, education, and every day life. Even one episode will result in the loss of one’s driver’s license, leading to a loss of transportation that may result in the loss of employment—a situation that is detrimental to a family’s well-being and stability.

Epilepsy affects more people than multiple sclerosis, cerebral palsy, muscular dystrophy and Parkinson’s combined – yet receives fewer federal dollars per patient than each of these. 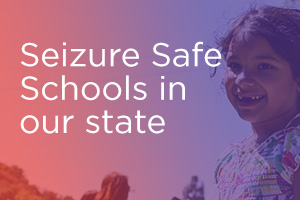 On February 6, 2020, Assembly Member Levine, Assembly Member Blanca Rubio, and Senator Umberg introduced the Seizure Safe Schools Act (AB 2116). This bill will improve the care of students with epilepsy in schools by ensuring:

1. Prescribed FDA-approved medications are administered to the student with epilepsy

2. Students have a seizure action plan in their file and that the action plan is properly distributed to any school personnel responsible for the supervision of the students

3. School personnel and students to be trained in seizure recognition and response using the Epilepsy Foundation training materials.

Stay informed and updated on next steps. Please sign-up to join us as an advocate.

Your voice is urgently needed. Complete the online form below (or click here) to submit your letter of support.

Access to Epilepsy Medication and Treatment
It is essential for all people with epilepsy to have ready access to quality care that appropriately suits their individual needs. Epilepsy California must ensure a full range of medication and treatment types are available to those that require any level of care.

Patient Protection
To help prevent breakthrough seizures, Epilepsy California strongly encourages notification and informed consent of both patient and physicians before changing or replacing a patient’s medication in any way. Antiepileptic drugs (AEDs) are very precise and establish a delicate balance for each individual with epilepsy. Any slight change to medications can cause breakthrough seizures. Because the therapeutic window is often very narrow for people with epilepsy it is critical that each individual have access to the medication that provides the best outcome for them.

Access to Seizure Rescue Medications
Individuals with prolonged or clustered seizures sometimes are prescribed an emergency seizure rescue medication to be administered by a caretaker. Current State laws and regulations are not consistent and prevent children in schools and adults in residential care facilities from receiving the medication. Epilepsy California seeks to work with State education and health groups to develop a life-saving plan that will support our students and our resident adults.

Civil Rights
Epilepsy California promotes the expansion of civil right laws to ensure that people with epilepsy have essential protections from discrimination based on disability in any part of life, including the workplace.

Connect with your Local Foundation

“EPILEPSY IS THE MOST COMMON SERIOUS BRAIN DISORDER WORLDWIDE. IT HAS NO AGE, RACIAL, SOCIAL CLASS, NATIONAL. OR GEOGRAPHIC BOUNDARIES.”