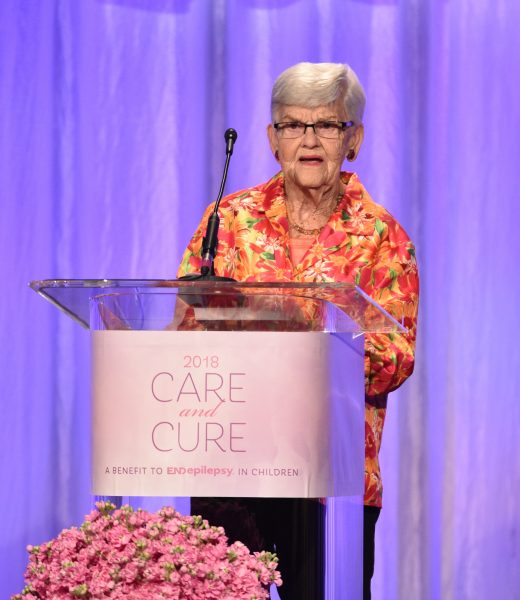 e Epilepsy Foundation recently hosted its 12th Annual Care & Cure Gala at the Beverly Wilshire Hotel in Beverly Hills, Calif., which helps fund specialty training of new pediatric doctors at epilepsy centers nationwide. This year’s gala, which focused on women in epilepsy and honored renowned film producer Mary Parent, raised nearly $1 million to fund the training of three new fellows at UCLA, CHLA and USC+LA. The event also honored registered dietitian Millicent Kelly, who is credited with saving the Ketogenic diet and using it to help pediatric patients with epilepsy get better control of their seizures.

“One can argue that Millicent single-handedly kept the Ketogenic diet alive as a treatment option for epilepsy because of her perseverance, belief and ongoing successful results,” said Karen Hermelin, event co-chair and wife of Mark Borman, event co-founder. “Not only was she a vital advocate for this important dietary approach, she also made an early career choice that was considered bold and daring during her time.”

Today, women’s ongoing leadership in the treatment of seizures and epilepsy continues with the many female epilepsy fellows that have been part of the Care & Cure initiative, including Michelle Armacost, M.D., an epileptoligist at Rancho Los Amigos National Neurorehabilitation in Downey, Calif. Dr. Armacost currently treats patients with epilepsy in the epilepsy monitoring unit as well as patients with stroke and other neurologic diseases on the acute neurology service.

“Parents have an un-ending desire to see their kids live to their full potential and, for parents who have kids with epilepsy, that means a life without seizures,” said Dr. Armacost. “Families should be able to easily locate an epileptologist with the knowledge and expertise to take good care of their children and who will not give up the fight to stop their child’s seizures. That is why Care & Cure is so important, by funding the training of neurologists like myself, Care & Cure has provided access to experts in the field to hundreds — if not thousands — of patients and their families, getting us one step closer to helping End Epilepsy.”

“Families oftentimes don’t have access to comprehensive care for children with epilepsy and if they do, the wait time to see a doctor is too long,” said Nicole Gumpert, Care & Cure event co-chair and Andrew’s wife. “With the changing healthcare landscape and increasingly limited access to specialty care, Care & Cure is more crucial than ever in providing funds to support our fight to End Epilepsy; our goal is to build on our success in Los Angeles by expanding to other markets in the U.S.”

In addition to funding pediatric fellows, to date, Care & Cure has:

The money raised this year will help fund the addition of three new pediatric epilepsy fellowships in Los Angeles and provide emergency respite care for families in need. More than 650 people attended the event to support the fight to End Epilepsy, including entertainment producer Amy Pascal, who was the first female honoree of the Care & Cure gala in 2011.

View photos and videos from this year’s Care & Cure Gala.